In India we have separate personal laws depending upon which Religion One belongs, therefore your religion determines which law shall govern your marriage and Divorce Procedure.


Section of each Act Dealing in Mutual Divorce:

What are the Advantages of Filing Mutual Divorce


Essential Requirements For Mutual Divorce are as follows:


To File for mutual Divorce The Couple have to Mutually agree upon certain facts Before Filing the petition they are:


Where Can You File For A Mutual Divorce Petition?

The Jurisdiction of Filing Mutual Divorce Petition are: 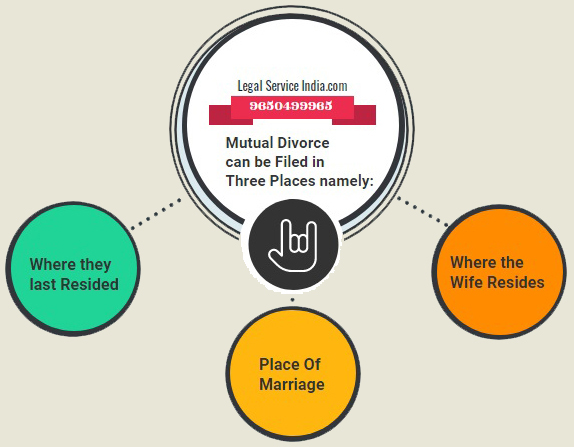 This is an exhaustive list and depends on the grounds of filing the divorce petition.

Petition to file for Mutual divorce:

The First step is to File a Joint petition in the family Court/District Court in the Correct Jurisdiction mentioned in the Graph given above. the petition should contain that both are unable to live together and have mutually agreed to dissolve the marriage and that they have been living seperately for a period of one year or more. the petition is to be duly signed by Both parties.

Respective lawyer will present the Mutual petition before the Hon'ble judge.

After Critically examining the documents and the petition presented in the court. The Hon'ble judge may upon being satisfied direct the court to record the statements of parties, then the parties have to both sign and give thumb impression in the petition (party's statements to be recorded on oath) and submit it before the Judge. The Court will than grant the first motion.

After the Completion of First motion a Cooling period of six months is given, before the Second motion can be filed.
This period is given to the couple to reconsider their descision. If they aggree upon to co-habit, give each other a chance, the couple may appeal before the court to cancel the mutual Divorce petition, which the court will happily do so.

After six months of the first motion or at the end of the reconcile period/colling off period If both parties still don't agree to live together and desires to go for second motion. they may file for second motion between a time frame of six to eighteen Months.

The second Motion also known as Final hearing of a Mutual Consent Divorce includes parties having to appear and record their statements before the Family Court.

Finally before Granting Divorce Decree the hon'ble court will satisfy itself that both parties have settled matters related to alimony, custody of a child, maintenance, property, and such other things amicably and that there remains no disagreements between the parties. the court will finally grant a Divorce Decree.

Once the Court Grants a Divorce Decree in Mutual Consent it cannot be Challenged nor can you file for appeal in Higher Court Challenging the Decree at a later date, It is the Final Order and nothing can change it. This is Because Mutual Divorce is a Consenting Decree of Divorce.

When goods seized by Local ...