The Literal Rule of Interpretation of Statute

The term Interpretation has been derived from the Latin term interpretari which means to explain or understand. Every statute has to be interpreted by the judge the way it is meant to be understood.

The purpose of interpretation is always to find out what the statute stands for, what is the defect it intends to remove and what is the remedy it seeks to advance[1]. The basic principle of the construction of statutes is that, the words have to be read and understood in their true literal sense. The Literal Rule is the first rule applied by the judges. The literal rule is also called grammatical rule by some jurists.

The literal rule means that a judge has to consider what the statute says ‘literally’, i.e its simple plain meaning without any ambiguity. It is said that the words themselves best declare the intention of the law- givers[2].

In the literal rule, the intention of the parliament while framing the statute, is the ordinary meaning of the words used. Justice Jervis, has described the meaning of literal rule in Abley v Gale[4]. Lord Diplock observed in Duport Steel Ltd v Sirs[5] that:
Where the meaning of the statutory words is plain and unambiguous it is not then for the judges to invent fancied ambiguities as an excuse for failing to give effect to its plain meaning because they consider the consequences for doing so would be inexpedient, or even unjust or immoral.

The words of a statute are to be first understood in their natural, ordinary or popular sense and phrases and sentences are construed according to their grammatical meaning, unless that leads to some absurdity or unless there is something in the context, or in the object of the statute to suggest the contrary[6].

No judge can deviate from the meaning of the statute though decision maybe unjust. The words of a statute must prima facie be given their ordinary meaning[7].

The literal rule accepts supremacy of the Parliament: the right to make laws, even though sometimes, they seem absurd. In the literal rule of interpretation, there is no contrary meaning within the statute.

Where there is no ambiguity in words, the question of intention ought not to be admitted.[8] The words are plain and clear under literal rule. The literal rule helps the judge in administering justice in a neutral manner.

When the language of the statute is clear and unambiguous it is not necessary to look into the legislative intent or object of the Act[9]. The literal rule puts a virtual boundary upon the judges from not deviating from the ordinary or literal meaning of the words used in the statute.

When the language of the statute is uncertain or ambiguous on then the judge have the duty to interpret. The literal rule appreciates precision and certainty which help the reduction of litigation.
The judges have to act upon the true intention of the legislature. The judges have no liberty to modify the law even if they feel that the true intention of the legislature have not been expressed rightly in the law.

Though literal interpretation must be accepted, it should not be followed if the statute is defective.

The advantages of the literal rule:


The dis-advantages of the literal rule:


The rules to be followed in literal rule of interpretation of statutes:

Ejusdem Generis is where general words follow anenumeration of persons or things, by words of a particular and specific meaning, such general words are not to be construed in their widest extent, but are to be held as applying only to persons or things of the same general kind or class as those specifically mentioned[10]. Ejusdem Generis means assuming general meaning of words or words similar kind.

Casus Omissus means cases omitted. Casus omissus also means a point not provided by the statute. It is basically a situation not provided for by a statute or contract and therefore governed by case-law or new-judge made law[11]. It is a canon of construction, requiring the court to draw up principles of statutory construction, which are then going to be followed by subsequent judges in their judicial decisions[12].

Expressio Unius Est Exclusio Alterius means that one thing having been mentioned the other is excluded. Lopes, L.J opines this maxim means a valuable servant but a dangerous master[13]. Expressio unius est exclusio alterius, it is a maxim for ascertaining the intention of the legislature. Where the statutory language is plain and the meaning clear, there is no scope for applying the rule[14].

Criticisms of literal rule of interpretation of statutes:

Literal rule claim that it rests on the erroneous assumption that words have a fixed meaning. The literal rule of interpretation leads to injustice. There are chances of creating misleading precedents while deciding cases. The courts do not have the power to alter the words of the legislature, it is not open for judicial innovations. The words cannot be understood properly without the context in which it is used.

The strict adherence to this principle may cause injustice and sometimes it might give results which are quite contrary to general intention of statute or common sense[15]. Due to the absurdity that is prevalent in literal rule of interpretation, the court may ascertain a literal meaning which was not intended by the legislature. If the court applies literal rule and feels that the interpretation is morally wrong then they cannot avoid giving the interpretation[16].

With changing and adopting of new policies and legislature, the statutes cannot be interpreted in their traditional way i.e, taking the literal meaning of the words used. Hence these make literal rule not suitable to present situation.

Cases studies relating to literal rule of interpretation of statute:

In this case, the defendant bit the plaintiff’s nose. The statute made it an offence 'to stab cut or wound' the court held that under the literal rule the act of biting did not come within the meaning of stab cut or wound as these words implied an instrument had to be used. Therefore the defendant was acquitted.

In this case, the defendant displayed flick knife with price tag in his shop. The statute made it a criminal offence to 'offer' such flick knives for sale. His conviction was quashed as goods on display in shops are not 'offers' in the technical sense but an invitation to treat. The court applied the literal rule of statutory interpretation in this case.

The meaning of Literal Rule was given in this case as, "If the language of the statute is clear and unambiguous, the Court cannot discard the plain meaning, even if it leads to an injustice."

The meaning of literal rule is stated that, As long as there is no ambiguity in the statutory language, resort to any interpretative process to unfold the legislative intent becomes impermissible. 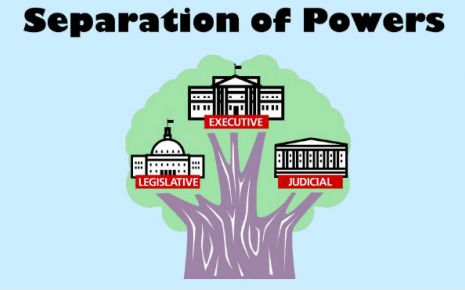 Doctrine Of Separation Of P...

An Overview Of The Doctrine...

The Relationship Between Ri...