Decongestion of Jails during COVID-19: Realisation of a Pending Reform

As per prison statistics compiled by the National Crime Record Bureau, between 2008 to 2018 the prisons in India had an average occupancy rate of 117 percent i.e. if there is a capacity of 100 prisoners in a prison 117 prisoners are detained therein. In 2018 there were 4,66,084 prisoners detained in all prisons in India, While the capacity of prisons was 3,96,223. Out of Which 3,23,537 were under-trial prisoners (Prisoners who have been detained pending investigation, inquiry or trial.), 1,39,488 were convicts (Prisoner who has been found guilty) and 2384 were detenues (Detained person especially a political prisoner). These statistics explicitly show that nearly 69 percent of the inmates are under-trial prisoners. 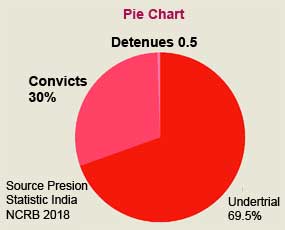 In criminal Jurisprudence A person is presumed to be innocent unless proved guilty Putting a person behind bars without being found guilty for unreasonable delay abridges his fundamental right of personal liberty enshrined in Article 21 of the Constitution. Among other causes such as lack of infrastructure, Illiteracy, Increase in Crime Rate two of the major causes for the overcrowding of prisons is the mechanical refusal of bail by the courts in India and delay in granting parole. In this context honorable Supreme Court recently reiterated that grant of bail is a rule and refusal is an exception to ensure that accused has the opportunity of a fair trial.[i]

It has been long pending demand of various jurists and legal experts to decongest the jails looking to the pathetic conditions of jails and to protect the personal liberty of the under-trial inmates. Several major reforms were introduced earlier to decongest jails. COVID 19 provided an occasion to realize this demand.

Major Steps towards Prison Reforms:
The Problems of prisoners traced back to 1835, Lord Macaulay, while presenting a note to the Legislative Council in India on December 21, 1835, for the first time, pointed out the terrible inhumane conditions prevalent in Indian prisons and he termed it as a shocking to humanity.

Thereafter a committee was formed in 1836 by Sir William Bentick. Later on, in 1888 a commission was appointed by Lord Dufferin which made the recommendations for the prison reforms and enactment of uniform legislation concerning prison. The Prison Act of 1894 is enacted after the recommendation of this commission which is current law governing the management of prisons. In 1919-1920 an all India Jail Reform Committee was formed to recommend the plan for the prison reforms, it was headed by Sir Alexander Cardew.

After Independence, in 1951, Dr. W.C. Reckless was invited to suggest the jail reforms. He submitted his report titled Jail Administration in India. In 1980 Government of India Constituted the Indian Jail Reform committee under the chairmanship of Justice AN Mulla, This Committee submitted its report in 1983. In the year 1987, Justice Krishna Iyer Committee was formed to suggest jail Reforms.[ii]

Furthermore, the 78th law commission recommended various steps for the decongestion of jails. Major among them were amendment in the Prisoners Act, 1894, reforming the bail system and for the proper arrangements of detention. 268th law commission report headed by former Supreme Court Judge B.S. Chouhan submitted that occupancy of the undertrials in the prisons is due to inconsistency in grant of bail and suggested for the uniform bail system in India.

Besides this, an amendment was introduced in code of criminal procedure in 2005, and section 436A was inserted which provides for the release of an accused pending investigation, inquiry or trial (except when offence punishable with death) on his bond with or without sureties if he has undergone detention for a period of one-half of the maximum sentence provided for the offence, it also provided that accused shall not be detained for more than maximum of sentence provided for the offence under the law.

Supreme Court also came to the rescue of the under-trial prisoners, out of which few of the notable moments are:

Justice Amitava Roy for suggesting plans for the decongestion of jails and suggest the remedial measures for granting remissions, Parole, and furlough.[v]

What Supreme Court directed during COVID-19:
The Supreme Court of India in re: contagion of covid 19 virus in prisons passed a slew of directions for protection of the inmates from spread of the contagious corona.
Conclusion:
While implementing the recommendations of the High Powered Committee constituted by the Supreme Court 42,529 under trial prisoners and 16,391 convicts were released on parole from jails to decongest them as per the report published by the National Legal Service Authority (NALSA). COVID-19 is rapidly spreading among the inmates, 17 positive cases reported from Rohini Jail in Delhi [i]whereas this figure reaches to 184 at Arthur Road Jail in Maharashtra[ii], Around 19 prisoners tested positive at Indore Central Jail in Madhya Pradesh[iii]. Meanwhile, State Governments are additionally taking other steps such as the transfer of inmates from one prison to another to contain the spread of COVID-19.

Dowry Is It A Custom Or Crime?

Admission Made By A Party B...

The Evolution of Corporate ...

commencement of a proceedin...