Dower In Light of Shariat

By Mohammed Rohin | Views 5403
When the marriage vows are recited in the Muslim religion, the husband promises to give or gives his wife a gift, that is known as Mahr, in other words also known as dowry or sadaq. It is an amount settled by the husband with the prior consent of the wife. It can be anything & can be in any form like property, money, gold, silver, ornaments, clothes etc , it is anything which can be owned.

It is indirectly can be termed as dowry which the husband pays to his wife in return of marriage, as the women is marrying him, he have to pay or give her a gift in lieu of marriage which is a gift to her. It is not fixed that everyone have to pay that much of amount or property to her wife , it is decided by the wife that what she wants , whatever the wife wants the husband have to give that otherwise the wife can refuse to marry.

There is no minimum or maximum amount fixed for Mahr. The women should demand that much of Mahr which the husband is capable of paying, women should keep in mind the condition, status, financial situation of the husband & his family.

There are arguments against Mahr that, what is the reason behind Mahr , why it is necessary, Some thinks that it is like buying a slave for the fulfilment of desires. Men & women both need each other physically, this is natural that both desire each other. One quality of a women is their beauty which attracts men the most. Second is that, even the women's have the similar sexual desires but they are good at hiding off their desires, but men are weak at this issue and they show their love & affection & to prove this, he buys gifts & spends money.

So the Mahr is also a form of showing love, to prove his affection, to show honour for his wife. Mahr makes the life of the women easier & peaceful, at the time of marriage men promises to wife that he will take care of her & their children, but in some cases the men's are seen running away from their duties & doe not perform their part, this leaves the women helpless. After the pregnancy & having a child, the women cannot leave her child anywhere, to nurture he child she needs home, money, food, clothes etc.

Many Muslim Jurists have divided specified dower into two categories, they are:
Unspecified Dower/Proper Dower
If the value of the dower hasn't been settled by the parties before or at the time of marriage or after the marriage, then it is known as unspecified dower. In such case, wife is entitled to get a reasonable amount. Such dower is not specified by both the parties at the time of marriage but such type of dower is settled by the court taking into

Rights And Remedies Of Dower

In the Muslim law, the concept or Mahr was evolved for the women's, so this provides them some rights also which are essentials to them & are available to them before & after marriage & after divorce or separation or after the death of the husband. Mahr is not just a gift or a price to be paid by husband, it is a safety provision for her, right given to her by the law.

It is upto the women what she choose as Mahr to be given by her husband before the marriage & the husband have to give it at the decided time. She can choose whatever she wants, but she had to keep in mind the financial status or the husband & his family.

The Muslim law mainly confers these rights to women to compel her husband for Mahr: The rights which are provided to the women are also the remedies which can help her to gain her Mahr.

Difference between the Shia & Sunni law relating to dower (Mahr)?
In Shia sect, law relating to dower (Mahr) are as follows:
There is no minimum limit to Mahr is prescribed by the law in Shia sect, the proper dower cannot exceed 500 dirhams. In the case where the husband died without consummation there is no due left on the husband in regard to Mahr. The agreements for no Mahr or no Mahr left by the sane & adult wife are valid in this sect. If the marriage is settle without deciding any dower (Mahr) then the whole of the dower is considered to be prompt.

In sunni sect, law relating to dower (Mahr)
There is a minimum limit which is prescribed for the specific dower that is 10 dirhams. For the proper dower there is no maximum limit. There is also no maximum limit for the specific dower. If the husband dies, whether consummation takes place or not, there is always a debt left in part of the husband & it is always proper in nature. The agreement for no dower at the time of the marriage is held to be void. If the proper agreement was not made then only a reasonable amount of dower will be considered to be prompt.

Issues Of Mahr In Indian Legislation

In context to the Indian legislation, the Muslim law is having a different place in the Indian judiciary. In India Muslim law is not codified, while other personal laws are codified. The peoples of Muslim religion in India are governed by The Muslim Personal Law (Shariat) Application Act, 1937. The law deals with the matters of Marriage, Inheritance, Charities, Succession etc. The Dissolution Of Muslim Marriage Act, 1939.

The section 125 of “The CPC OF 1973”, provides a minimal amount of protection to all the divorced women's. But this does not solve the problem of Mahr. It gives only a kind of protection to the matters of divorce. Mahr and maintenance is also covered in this act. The concept of Mahr in India is so much confused, people's think of it as dowry, though dowry is a far away other concept from Mahr, even some people regard it as shameful.

Mahr is a In the case Bai Tahira v. Ali Hussain, supreme court held that after paying all the Mahr the husband is not free for divorce. In the famous shah bano case, it was held that the amount of Mahr could not conclude as the amount of divorce. Mahr is a gift which the wife was already getting & the amount for maintenance in divorce is a different thing.

Conclusion
In Muslim marriages an compulsory gift is given by the husband, that is Mahr. Unlike a price paid to bride, however, it is gifted directly to wife and not to her father. Although the gift is often money in common, it can be anything (valuable properties) agreed upon by the bride and groom such as a house or any business that is put in her name and can be run and owned entirely by her if she chooses.

As there are many Islamic laws ,there is no fixed minimum or maximum limit for dower, so there is always a chance that the groom might settle the Dower with an unfair amount, it happens in most of the cases. It may at times lead to cancelling of the marriage if both parties can't agree upon Dower as it is mandatory for both the parties to be in an agreement with the amount of Dower.

Therefore, I, hereby conclude by stating that although Dower is a security provision for married women in Islam, there is no fixed amount of dower, which is one of the drawbacks in Muslim law. In fact, all personal laws must be scrapped and UCC must be implemented. This way our society will exist sin a state of perfect peace and harmony. 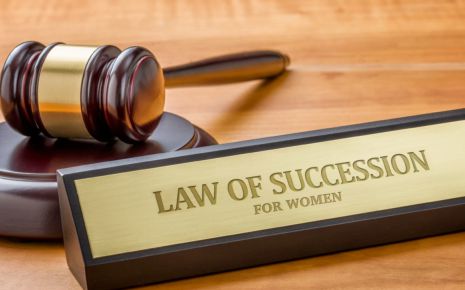