Issues Of Representation Of Muslims In The Public Sphere

By Anto Robert G | Views 4785
Tracing the origin and ethnicity of Muslims in India, the findings suggest that most Indian Muslims are ethnically Indian since they are the descendants of the early converts to Islam.[1] But still, the quality of Muslim life may lag behind that of Hindus nationally, local and inclusive cultures have been resilient in the south and the east.[2] This is basically because of the frivolous efforts of the RSS who claim Muslims as Anti-Indians. Also, they try to marginalize the Muslims in the following dimensions:

The intolerance of such people regarding the acceptance of the representation of Muslims in the Public Sphere has led to a huge threat to the concept of Multiculturalism, which is the essence of our Indian Constitution. In this chapter, we will be analyzing various issues that act as a hindrance to the representation of Muslims in the public sphere, which in turn had buried the concept of Multiculturalism. Here we will be trying to establish the significance of Multiculturalism, which ties us together, and would also come up with the best possible solutions to solve these issues.

Historical Significance:
Throughout history, Muslim narratives were excluded and consciously forgotten by colonial representatives and Hindu nationalistic historians.[3]And now that Muslims are portrayed as anti-national. Most often such Hindu nationalistic historians try to establish an Islamophobic campaign with their biased historical backing. For example, they tend to propagate the incidents where temples were destructed and try to suppress the apposite facts about Tipu Sultan’s contributions to the maintenance and development of the temple. Professor Mahboob Basha in his speech at Moulana Azad National Urdu University (MANUU) emphasized that “Tipu was very much Indian and died on this soil for this soil.”[4] He made this statement with the following supporting factual evidence: 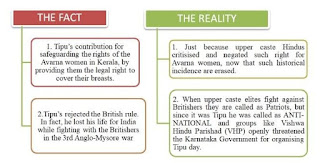 This is just one example of marginalization of Muslims through Academical means were history of Tipu Sultan is misrepresented by the biased Hindu nationalistic historians. Likewise, these Hindu Nationalists have attempted to academically exploit us. Now it's high time for us to turn back and change our focus from such biased histories, which promotes Islamophobia to Multiculturalism.

Citizenship Amendment Act (CAA):
The CAA gives a path to citizenship to the subject minority communities,[5] by enabling them to apply for citizenship by registration or naturalization, except those in the tribal areas of Assam, Meghalaya, Mizoram, or Tripura.[6] The Statement of Objects and Reasons of the CAA declares that its object is to protect those who suffered “persecution on grounds of religion in those countries.”[7]

It is imperative to note that, in the disguise of the above-mentioned Statement of Objects and Reasons, CAA gives path only for Hindu, Sikh, Buddhist, Jain, Parsi, and Christian immigrants. What about religious persecution of other minorities like Jews and Muslims? What about atheists? A simple answer for any such questions is that our government is least bothered about the same. The fact that Muslim immigrants in India might not vote in favor of the Hindutva policies of the regime presently in power at the Centre in India renders the CAA is even more suspect.[8] In covering only some religious communities and not others, the CAA violates the principle of secularism which is a part of constitutional morality.[9]

“Secularism” is a relatively recent word and one of imprecision.[10] Initially, at the time of drafting the constitution, the word Secularism was rejected again and again by the constituent assembly members. Later, in 1976 it was inserted in the preamble during the national emergency. And now that, Secularism has been held by the Supreme Court to be a part of the “basic structure” of the Indian Constitution and of “constitutional morality.”[11] Then how is it possible for the legislature to come up with CAA? When political elements like BJP (with RSS base) are provided with such powers, anything would be possible, including the destruction of Babri Masjid.

This makes us realize the significance of voting cautiously.
Now that, it is not just about passing such a discriminating law, it is also equally pertinent to note the other implications of the said act. Even in such a case were, our government is interested in marginalizing Muslims, since we people strongly supported the spirit of secularism, we came forward to protest against this unjust law. As a consequence of the same, several riots took place in our country.

In such a scenario, by taking the media in their hands, our government had hand-cuffed us from knowing about what was actually happening in our country. Whoever spoke against this unjust law was labeled as anti-national. Also, when people expressed their concern by drawing Rangoli (as a protest against CAA) people were detained by the police officials. In this way our fundamental right to freedom of speech and expression[12] was inhumanly infringed. The sole purpose of the law is to safeguard the interest and the welfare of the people, and know that when the purpose itself has got shattered, the mere existence of the law itself is been questioned.

The sum and substance of the anti-CAA argument, therefore, is that the CAA and NRC are essentially intended to strip Indian Muslims of their citizenship.[13]Undoubtedly CAA is arbitrary and is contrary to the basic structure of the constitution. And this is how the Muslims are politically marginalized, which in turn implicates further marginalization through other dimensions. Now it's high time for us to come together and fight for adaptation of the concept of multiculturalism in order to enhance India as a better place for peaceful co-existence without any discrimination.

Inadequate Reservation for Muslims:
Muslims constitute 13.4% of the population of India.[14]In order to ensure the optimum level of representation of Muslims in the public sphere, reservation must be secured for them. The fundamental principle of Justice is that “equals have to be treated equally and unequal has to be treated unequally.”[15]

This form is the base for the concept of reservation. And as of now, minimal reservation is given for them, which is insufficient to meet the end of social justice. Islamophobic people argue that Muslim ideologies are against the caste system and thus there are not entitled to reservation. In this regard, the Mandal Judgement had cited the encyclopedia, Britannica which said that:
The concept of 'caste' in this behalf is not confined to castes among Hindus. It extends to castes, where- ever they obtain as a fact, irrespective of religious sanction for such practice. ...Non-Hindu religions like Islam, Christianity and Sikh did not recognize caste as such though caste did exist even among these religions to a varying degree.”[16]

Moreover, it must be understood that reservation is all about bringing up those people who are socially and educationally backward. It is desirable that the leaders of the community move for remedial action in a manner that is constitutionally valid and judicially sustainable, which means they should try to secure reservation and other measures of social justice for BC Muslims, along with a scheme of categories that will ensure BC Muslims cease to be exposed to competition with BC’s who are less backward.[17] Therefore, reservation must be ensured for Muslims in order to eradicate the marginalization of Muslims in terms of employment and in other spheres. And thus, promote the spirit of Multiculturalism.

Cultural Indifferences:
Muslims have their own culture, like Muslim women wearing Partha, and Muslim men growing a long beard, but in order to maintain uniformity, in few schools, colleges and at times even in few offices, Muslims are not permitted to follow their culture. By enacting a law criminalizing the practice of triple talaq in Islam,[18] again there is an interference of the state in Muslim’s culture, but it is imperative to note that, triple talaq was criminalized for safeguarding the interest of Muslim women. It is true that even though bigamy is criminalized, in order to protect the sanctity of Muslim’s culture polygamy is still in practice. Therefore, Cultural differences are always inevitable. In order to develop a multiculturality in the society, it must be ensured that, whenever it is possible, the Muslim’s culture must be safeguarded and in those cases were the welfare of people contradict with such cultural practices, the welfare of the people must be upheld.

The above-depicted pictures were uploaded along with an article written by Deepak Harichandan in THE HINDU online newspaper[19] (Cartoonscape section). With the premise that these pictures don’t have any political or religious agenda, we can conclude that these pictures depict the threat of coronavirus for the entire world. When you investigate the picture on the left side, it can be understood that a person wearing Muslim attire is carrying coronavirus and is causing a threat to the entire world. Here the cultural identity of Muslims wearing such attire is misused.

This is basically because of the groom created in the public due to picturization of a man with a long beard, wearing a Muslim’s attire is a terrorist. Such perception had not been developed in the minds of people just like that in a single day. Because of the influence of movies and social media, we have been trained to believe that, all terrorists will be under the influence of Muslim’s cultural identity and thus Muslims are terrorists. We people should affirm that we would never give a chance for such cultural differences to be misused by a few for satisfying the political and religious agenda.

Also, it is imperative to note that, the picture on the left was uploaded on March 26,2020, at 00:15, since several readers raised their objections for such Islamophobic picturization, in effect to the same within 20 hours the said picture was removed and the picture in the right with the neutral representation of the attire was uploaded along with the editor’s apology.[20] Hence, as and when you realize that, there is the involuntary imposition of Islamophobic content, we should raise our serious objection for the same. This must be done in such a way that, the Islamic culture is harmoniously constructed. And it is apposite to note that, such steps will definitely help in the advancement of the concept of multiculturalism in India. Updated: March 26, 2020 20:17 IST

Conclusion:
Now that, we had analyzed various issues in the representation of Muslims in the public sphere. It is understood that marginalization of Muslims through different dimensions are basically because of the feeling of “otherness” created by the Islamophobic people. Since our government itself acts as a threat to multiculturalism, we people should be very much cautious while voting. Most important before even thinking about bringing a change in our society, we should make sure that in every election there is a 100% polling rate. In order to enhance the concept of multiculturalism, we all should join together and develop a sense of adaptability and acceptance of culture overall sects of people.

Contract of Indemnity: The ...

Wrongful restraint of a man...