Is the cooling off period in HMA Mandatory or directory: Analysis with the Amardeep Singh v/s Harveen Kaur

The consent theory of divorce is based on the reasoning that freedom that the parties to marriage enjoy for entering in the marriage should be the same to dissolve the marriage. Continuing of a marriage where both the parties lack compatibility would not only result in impacting the parties but also become a breeding place for aberrant and delinquent children. [1]

The very substance of marriage is Mutual fidelity and if due to any reason the parties to marriage feel that such fidelity can only be preserved by dissolution, such dissolution would prevent chaos and make the divorce between the parties' trouble free and inexpensive. [2]

In the present case the parties filed a divorce under Section 13-B of the Hindu Marriage Act,1955 which deals with the Divorce by mutual consent.

The essentials of the said provision is: 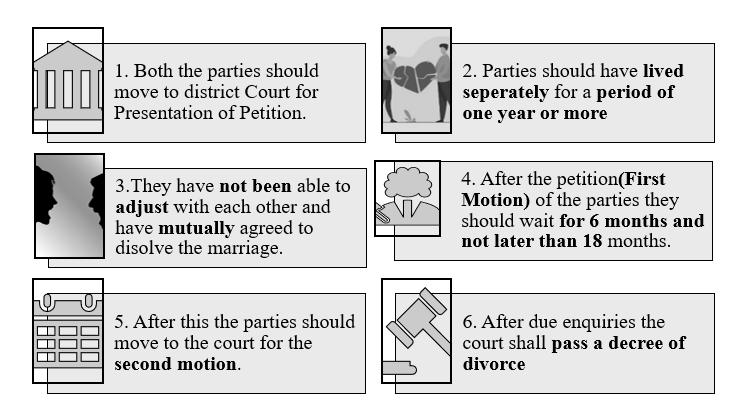 In the present case the lower courts had already decided on the fact that there was no chance of rehabilitation as both had been living separately since 2008, also the question of alimony and custody was also decided. The parties in the present case moved to the Apex court in order to waive of the minimum six-month cooling period between the first and the second motion.
Before deciding on the question that whether the cooling period can be waived off, it is essential to analyse the position of the courts in deciding over matters relating to personal laws or passing decisions in its exercise of the Article 142[4] which are in contravention with any statutory provisions.

Judicial approach on the given issue in previous judgments of Courts
Before this Judgement there was a conflicting opinion on by Supreme Court on waiving of the cooling period in matters related to divorce, which is discussed below:
In a catena of cases [5]it has been held by the Supreme Court that no court has the authority to issue a direction or order an authority to act in contravention to a statutory provision. The purpose of the courts is to enforce the rule of law, not to issue orders or directions that are contradictory to law.

The same was held in Manish Goel vs Rohini Goel[6] where the court while deciding on the fact that cooling off period should be waived off or not, in addition to this a constitution bench in Prem Chand Garg v. Excise Commr[7] stated that while exercising of the Article 142 of the Constitution to do complete justice to the parties the courts must not only consider the consistency of the order with the fundamental rights but should also take in account the substantive provisions of the relevant statutory provisions in question.

It should be understood that the courts cannot pass any order under Article 142 which is against the procedure established in the said statutory provision as it would lack a basis on which such a decision can be concluded.[8]

However, it is pertinent to note that that power under Article 142 had been exercised in cases where the Court found the marriage to be totally unworkable, emotionally dead, beyond salvage and broken down irretrievably parties and the article was used to prevent further agony to the parties. In addition to this, the Supreme Court without taking in consideration the above-stated judgements had passed a decision Nikhil Kumar vs. Rupali Kumar, [9]in which the cooling-off period of 6 months was waived by the Court under Article 142[10] of the Constitution and the divorce was granted to the husband and wife.

Court's decision
In order to remove the conundrum between the two conflicting views, the court upheld the decision in Manish Goel[11] and explained that decision of the Apex Court in Manish Goel decision was not considered while waiving off the cooling period in the previous and judgements and the power under Article 142 cannot be exercised if it is in contrivance to a substantive Statutory provision especially when no proceedings are pending before the court for the purpose of waiver of the Statute.

However, the court also analysed the legislative intent of Section 13-B(2) to understand whether the provision was compulsory or directory in nature.
As a result, if the circumstances of the case necessitate it and there is no hope of reconciliation between the parties, the courts have been increasingly ready to waive this term.

Analysis
Marriage was regarded as a samskar (sacrament), a religious requirement, and thus indissoluble in Hindu law. For almost two thousand years, shastric law and Hindu society were unaware of divorce. Divorce was the exception rather than the rule, and acceptance was based on custom and exception.

The correlation between law and society is of paramount importance. [12]A matrimonial alliance plays a crucial role in a country's societal setup.[13] Under traditional Hindu law, as it existed previous to the statutory law on the subject, and it could not be dissolved by consent. However, as a result of the influence of western ideas, some laws were progressively enacted in some areas.

It was due to this westernisation that the concept of divorce by mutual consent was introduced by the way of amendment of 1976 which prohibited a divorce from being granted until six months have passed, the motive of such period was to allow the parties to reconsider their positions so that the court will only grant a divorce by mutual consent if there is no hope of reconciliation.

The purpose of the clause is to allow the parties to consent to the dissolution of a marriage if it has irreversibly broken down and to allow them to rehabilitate the marriage using available choices. The modification was motivated by the belief that the forcible continuation of marriage status between unwilling couples served no purpose. The purpose of the cooling-off period was to prevent a hasty judgement if there was a chance that conflicts may be resolved otherwise.

The goal was not to prolong a meaningless marriage or the suffering of the parties when there was no hope of reunion. Despite the fact that every attempt should be made to save a marriage, in cases where there are no chances of reconciliation, the court should be powerless in enabling the parties to have a better option.

It was held in Grandhi Venkata Chitti Abbai [14]that reading of Section 13-B (2) as obligatory would undermine the fundamental goal of liberalising the policy of decree of divorce by mutual consent especially when the parties have been living separately for a significant period of time, and it has been held by the court that the waiting period is merely advisory in nature[15] and the aim and object of the provision is to provide time for the parties to reflect and reconcile.[16]

The court explained that in order to determine whether a provision is mandatory or directory, language alone is not always decisive but the subject matter of the provision must also be taken into account. The court laid down that in the current scenario even with the analysis of a plethora of cases, no universal rule can be construed in determining whether mandatory enactments shall be considered directory only or obligatory with an implied nullification for disobedience and in such cases it becomes essential for court to analyse the real intention of the legislature.

For doing so the court should not only consider:

By applying the rules of interpretation in provision 13-B(2), one can note that if the said provision is made mandatory it would cause inconvenience and agony to the parties involved from furthering their interests as noted in the present case. Thereby the court laid down certain conditions for the courts to consider while waiving the cooling-off period and making the said provision directory in nature.

These conditions are:
Conclusion and Recommendations
While the decision made by the court was appropriate and crisp, the author believes that the court that certain amendments could be made to prevent the misuse of the law. The author would make a few recommendations in this respect: The judgement of the Supreme Court in the case is considered to a landmark judgement and has set precedent for the other courts with regards to it declaring the cooling off period being directory in nature, the progressive interpretation of the judgment explains the dynamic nature of the courts and how its judgments like these which prove how law changes society and how judges never fail to uphold the principles of equity, justice and good conscience and proved that a Hindu Marriage is no longer a social obligation or sacrament rather it is an institution of happiness and for this the circumstances leading to a happy marriage is crucial.

Acid Attack: A Curse For Women

When Can A Matter Be Pursue...

The Doctrine of Privity of ...