Powers And Priviledges Of Members Of Parliament

A cornerstone of democratic ideals in any representative democracy is parliament, which serves as a forum for debate on matters of social and civic importance in any popular democracy. Though the notion of Parliament has its roots in European nations dating back to the Middle Ages, it has been an integral feature of India's democratic framework from the country's creation.

Both houses of parliament were established following the first general election in 1952. It should be emphasised that the Constituent Assembly served as the interim legislative body after the Constitution was enacted and until regular elections, which occurred between 1950 and 1952.[1]

Article 79 of the Constitution specifies the organisation of parliament. The President and the two chambers, the Lower House or House of People and the Upper House or Council of States, are listed as members of Parliament.[2]

The Rajya Sabha is the Indian Parliament's Upper House. Because it can never be dissolved, this home is eternal in nature. This is due to the fact that every member of the Rajya Sabha is elected for a six-year term, and one-third of the members retire every two years, while the rest of the members remain in office. It's similar to a series of elections. This house is made up of 250 members, with 238 of them being elected by a single transferable vote. On the recommendation of the council of ministers, the President nominates 12 members.

The members would be chosen by the elected members of each state's legislature, with proportionate representation in each state. This clause reflects the Council of States' federal nature, in which each state is represented proportionally. The number of members representing each state, however, ranges from one to thirty-one (for Uttar Pradesh).[3] To become a member of the Rajya Sabha, one must be of Indian nationality, not occupy any profit-making post, and be at least 30 years old.[4]

If a person occupies a profit-making office, is of unsound mind, or has been discharged insolvent, he or she must be disqualified as a member of the house. he/she is not a citizen of India and has voluntarily accepted the nationality of other nations; he/she is disqualified under any law made by the Parliament.[5]

The LokSabha shall exist and shall be composed of a maximum of 530 members chosen from various states, with no more than 20 members chosen from the Union Territories. If the President believes the Anglo-Indian Community is underrepresented in parliament, he may appoint two Anglo-Indian Community members. Some seats have been set aside specifically for the Scheduled Caste and Scheduled Tribes populations across the country.

The Representation of the People Act, approved by the Indian Parliament in 1951, allocates representation to the states and union territories.. The Lok Sabha, unless dissolved midway, continues its tenure for 5 years from the day of its first meeting.[6]

Members of parliament are granted privileges or advantages under Articles 105 and 194 so that they can carry out their responsibilities and functions without impediment. Privileges like this are provided because they are necessary for democratic functioning. From time to time, the law should specify these authorities, privileges, and immunities.

These privileges are regarded exceptional provisions that take precedence in the event of a disagreement. These provisions also put on them the responsibility of enacting efficient laws that do not infringe on the rights of others. Although the legislature or the Legislative Assembly can use their rights, privileges, and immunities, they cannot function as a court of law.[7]

Article 105(1) provides that subject to the provisions of this Constitution and to the rules and standing orders regulating the procedure of Parliament, there shall be freedom of speech in Parliament.

Article 105(3) again contains two parts. Part one says that in other respects the powers, privileges and immunities of each House of Parliament, and of the Members and the committees shall be such as may from time to time be defined by Parliament by law. Part two says that until so defined, the powers and privileges shall be those of the House of Commons of the Parliament of the United Kingdom and of its Members and committees at the commencement of the Constitution. Accordingly whenever a question arises with regard to the availability of a privilege, it becomes necessary to ascertain the powers, privileges and immunities of the House of Commons as on the 26-1-1950[8].

It is to be noted that Article 105(3) is transitional in character and the Constituent Assembly contemplated that a statute would be made in due course after gathering sufficient evidence in this regard[9]. The Constitution (44th Amendment) Act, 1978 made some cosmetic changes in Articles 105(3) and 194(3) (w.e.f. 20-6-1979) but the substance remains the same.
In India, some legislative privileges are expressly mentioned in the Constitution while the others are recognised in the Rules of Procedure and Conduct of Business in Lok Sabha framed under its rule-making power.

Privileges Mentioned in the Constitution


With regard to the other privileges, the following are recognised under the Rules of Procedure and Conduct of Business in Lok Sabha as well as by certain laws:

As legislative privileges are not codified in India, the question whether fundamental rights control the privileges or not was considered by the Supreme Court in some cases.

In M.S.M. Sharma v. Sri Krishna Sinha the following legal principles were laid down by the Supreme Court on this issue:
Courts and legislatures
When one examines the relationship between the courts and legislatures, the questions as to the authority to decide the existence of a privilege and as to whether the courts could examine the validity of a committal by a legislature for its contempt or breach of privilege etc. have to be addressed. In fact, the situations under which the legislatures claim privileges in India bring the courts in the arena quite often. In India, the legislatures may claim the privileges in three situations: (1) when the Constitution grants it specifically; (2) it has been created by a law of the legislature; (3) it was enjoyed by the House under Article 105(3) or 194(3). No doubt the courts in these circumstances cannot be denied any role in this area.
Some of the above-stated issues were examined by the Supreme Court in Kesava Singh In re.

In the majority opinion in this case (6:1), the following propositions of constitutional interpretation were laid down:


This case does not settle the law of privileges in India for three reasons. Firstly, the relationship between fundamental rights in general and the legislative privileges was not spelt out clearly. Secondly, legally speaking, advisory opinions rendered by the Supreme Court under Article 143 are not binding on the President and this factor destroys the binding nature of a judicial precedent. Thirdly, the principles of law laid down by the Supreme Court in this advisory opinion are totally based upon the five questions that were limited to the facts and the circumstances of the case set out in the presidential reference. If the facts are different then the principles of law have to be laid down differently.

It is to be noted that the Constitution of India already contains certain immunities and prerogatives for the President and the Governors under Article 361 and hence there should be no difficulty in giving recognition to certain legislative privileges. Further, it may be pointed out that the argument that the codification leads to curtailment of privileges is wholly misconceived as the privileges of the British House of Commons up to 1950 are clearly laid down and the same can be codified within the framework of the Indian Constitution.

Famous Landmark Cases
Conclusion
After examining Articles 105 and 194, it is evident that they are absolute. These unique provisions are given to the Parliament in order for it to function properly. These provisions also put on them the responsibility of enacting efficient laws that do not infringe on the rights of others. Although the legislature or the Legislative Assembly can use their rights, privileges, and immunities, they cannot function as a court of law.

There is a distinct line dividing which rights and privileges are absolute and which are not. Legislative Assemblies and Parliaments of India, for example, never perform any judicial functions, and their historical and constitutional context does not support their claim to be considered courts of record in any way. As a result, no exemption from judicial review of general warrants issued by the House in India may be asserted.

Both the Parliament and state legislatures have a responsibility to study carefully before passing any legislation to ensure that it does not infringe on other people's rights. It is also the members' responsibility to appropriately use these rights and not to abuse them for objectives that are not in the best interests of the nation or the broader public. As a result, we must remember that power corrupts, and absolute power corrupts totally. To ensure that this does not occur when using the powers conferred, the public and other governing bodies must remain vigilant at all times. 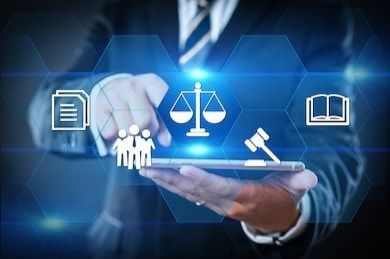