History Of Jammu And Kashmir

The princely state was created after the First Anglo-Sikh War, when the East India Company, which had annexed the Kashmir Valley, Jammu, Ladakh, and Gilgit-Baltistan from the Sikhs as war indemnity, then sold the region to the Raja of Jammu, Gulab Singh, for 7,500,000 (75 lakh Nanakshahee) rupees

The Instrument of Accession is a legal document executed by Maharaja Hari Singh, ruler of the princely state of Jammu and Kashmir, on 26 October 1947. By executing this document under the provisions of the Indian Independence Act 1947, Maharaja Hari Singh agreed to accede to the Dominion of India.

Why There Is A Need For Article 370A

In 1947 we have sign instrument of accession and said that we we will make a special provision for Jammu and Kashmir. But it also a temporary provision.

take permission from the constituent assembly of Jammu and Kashmir.

Temporary Provisions With Respect To The State Of Jammu And Kashmir:

Temporary provisions with respect to the State of Jammu and Kashmir:


Overview Of Article 35A

Article 35A of the Indian Constitution was an article that empowered the Jammu and Kashmir state's legislature to define permanent residents of the state and provide special rights and privileges to them Non-permanent residents of the state, even if Indian citizens, were not entitled to these 'privileges'. president along with the state assembly will decide that which are the laws that will be applicable in Jammu and Kashmir.

How Can Anyone Have A Permanent Residence In Jammu And Kashmir:

This provision is very discriminating for womens this provision and constitution of Jammu Kashmir that if any Kashmiri women marry an outsider or a non Kashmiri then she will not able to use property rights of her any more in 2002 supreme court ruled that the property rights of Jammu Kashmir women will be as her but she will not able to transfer it to the kids.

In 5th August 2019 president Ram Nath kovind use his power that clause 1 of the article 370 "Constitution application to Jammu and Kashmir order 2019" that it will be replaced 1954 order.

370(1): The Constitution Application to Jammu and Kashmir

Article 367 basically interpretate article 370 and in 2019 presidential order clause 4 was inserted to article 367.

The article 367(4) states that the Indian Constitution will apply to the entire state of Jammu and Kashmir.

All references to the Sadar-i-Riyasat of Jammu and Kashmir in all official documents shall mean Governor.

All references which are made in regard to the Government of Jammu and Kashmir now stand for the Governor acting on the aid and advice of the Council of Ministers.

A new union territory will be made which comprise the the region of ladakh ( kargil + Leh ) without legislature.

That a new union territory name jammu kashmir will be made , with legislature. 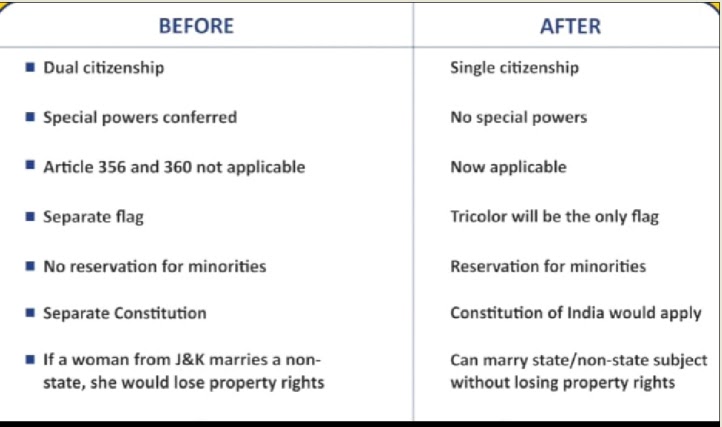 Complete Analysis After 1 Year Of Revocation
The good aspects:
The Bad Aspect
With the tourism industry crippled and 4G Internet still not restored, J&Ks economy has suffered. While terrorism considerably dipped, cross-border infiltrations have gone up and more locals are being recruited for terrorist activities.

Internet Speed
The Internet shutdown in the J&K U.T. between August 4, 2019 and March 4, 2020 was the longest in any democracy. Even after the shutdown ended, only 2G and broadband Internet were restored

State of joblessness
The CMIE data show that the unemployment rate (UR) breached the 20% mark in August 2019 after staying below the figure for 30 months.

Economy Shock:
In the 120 days after August 5, 2019, the 10 districts of the Kashmir Valley suffered a loss of ₹17,878.18 cr. according to the Kashmir Chamber of Commerce & Industry. Here is how the figure was arrived at;

Lockdown Impact:
Terrorism-related deaths hit a low in 2012 after continuously declining from 2001. However, terrorism returned to the Valley since, peaking in 2018

Fatalities Drop:
According to the South Asia Terrorism Portal (SATP), the lockdown and increase in Army presence led to a decrease in terrorism-related deaths. Yet the fatalities post-lockdown were higher compared to the low levels seen in 2012.

Local Threat:
Despite the decrease in terrorism-related deaths, the number of local recruits increased. In 2020, until March, 87.5% of the militants killed were locals according to SATP.

The local media in Jammu and Kashmir were one of the first services to take a hit, the Forums report noted. With all communication suspended and Section 144 imposed across the state, no newspapers were published for two months.

A recent report by the Forum for Human Rights in Jammu and Kashmir has stated that there were across-the-board violation of human rights and frequent closures, harassment at barricades and checkpoints, among various other restrictions of basic freedoms and access to legal aid.

The report noted that there had been an across-the-board violation of human rights, including the vitiation of protections such as habeas corpus, prevention of illegal detention and strict restrictions on arrest and detention of children.

Mass detentions of politicians and activists, including three former chief ministers and 144 minors were reported after 4 August. The youngest detained child is reportedly 9-years-old.

The authorities in Jammu and Kashmir have halted the investigation in tens of thousands of cases alleging human rights violation against the government and security forces before the region was converted into a Union Territory (UT) last year August.

The government had abolished the Jammu and Kashmir State Human Rights Commission (SHRC) on 5 August last year after the central government abrogated Article 370 in the region.

government abrogate article 370 without discussion in Kashmir assembly because they have full majority so do we heading towards autocracy so why government did so why government did this for Kashmir and not for Nagaland because of political advantage or nationalism. In last one year basic human rights are destroyed in Jammu and Kashmir that access to internet is our fundamental right but since last one year it is totally band so how can a society leave without internet freedom of speech and expression totally scrapped so what will happen if people of Jammu and Kashmir did not able to give their statements regarding article 370. Constitution of the India provide equal protection of law to all the citizens but what we are seeing that if anyone arise question against government, government using NSA, UAPS

and sedition laws the living standards of the Kashmiri have gone down below but still we are celebrated abrogation of article 370 after one year former chief ministers of kashmirs are also detained under the Jammu Kashmir public safety act 1978 in last one year democracy is total destroyed in Jammu and Kashmir so one nation one flag one constitution why it is not for Nagaland? right to access to information is also our fundamental right but stii we are not getting information of jammu and kashmir.

A democratic government should not be allowed to run its administration in a dictatorial manner. The government is elected to serve the people, not to torture them or harass them by applying monstrous detention laws wrongly just to satisfy its ego. In a democracy, people are sovereign, not the government. No government is above criticism or public scrutiny. Criticism is a must to bring responsibility, transparency, and maturity in the administration. The DMs and the police officers should never forget: "In this land of Dr. B. R. Ambedkar, nobody is above the law.

The Law is the King of Kings.

All About Digital Personal ...