By Saikat Mukherjee | Views 6314
Information is referred to as that stimuli that attributes some sort of a meaning in some context to its receiver[i]. This same information when stored in a computer or a laptop or any other storage devices, changes name and becomes data. It is this data that holds key in today's world.

Taking into account present society, there is a great and urgent need for access and availability of information, for a variety of reasons. Firstly, it acts as an aid to decision making and hence is one of the most essential tools of decision makers at all levels. Secondly, correct information has a deep effect on the human psyche, because a great deal of change can happen in the human mind after perceiving a set of information.

What is essential to understand is that availability of accurate information in the public domain is the most vital step to preventing corruption. When the citizens have the required network to access key and correct government data and facts, the abuse of power and the presence of widespread illegality in government activities becomes a distant past.

This is primarily because when citizens have the required access to information, they get to know each and every activity that the government indulges itself in and that creates a check for those people who otherwise would have blatantly abused power [iii]. Most countries around the world acknowledge the right that the citizens have to information. Nearly 120 countries around the world have some law or the other that guarantees right to information to its citizens. We shall, through the course of this article take a detailed look at two of the countries, India and the US.

Right to Information: The Indian Approach

On 12th October 2005, The Right to Information Act came into effect in the Indian Union[iv]. It was enabled mainly to ensure that Indian Citizens are made capable to exercise their rights of asking pertinent questions to various branches of the government. The main aim of the act was to curb the main problem, the growing corruption in India.

This act makes it mandatory for any public or government authority to respond to an Indian Citizens request for information regarding its working within a period of 30 days. That means that the public authority[v], if it fails to respond to the request for information, can be held liable in a court of law. What is important to note here is that not everything comes under the umbrella of RTI. Key sectors such as defence and national security has been kept outside the purview of this act. Moreover, any information pertaining to the personal details of any employee of such organizations also do not fall under the purview of this act.

In the pre RTI era, there were a plethora of other legislations which governed this area, the Official Secrets Act being the primary such Legislation. The introduction of the RTI Act in 2005 has reduced the coverage of many such legislations to a large extent.

The history of RTI is a long one but the event that led to its transpiration is an interesting one. In the year 1987, a few labourers were refused wages on the charges of inconsistent performance. The Mazdoor Kissan Shakti Sanghatan (MKSS) demanded from the officials that proof be given of their inconsistent performance, subsequent to which, a dearth of corruption in that department surfaced. Keeping this in mind, The Freedom of Information Act 2002 was passed which subsequently in the year 2005 became the Right to Information Act. A police station in Pune is credited for having received the first ever RTI application in the year 2005 itself[vi].

RTI in India: The touchstone of efficiency

As the country gears up to celebrate more than one and a half decades of the RTI legislation, India still ranks 37 on the World Justice project for the efficiency in the Act's enactment[vii]. In the state, at the moment, most of the posts of information commissioners lie vacant even as a single chief information commissioner struggles to deal with the entire department single headedly. Mr Winson M Paul, the State Chief Information Commissioner in one of his interviews had stated that thousands of such RTI applications (13200 to be specific) were pending in the states due to due to acute under staffing in the department[viii]

According to former Central Information Commissioner Shailesh Gandhi, 54% of the RTI's filed in the Union of India, pertain to information which the government organizations are supposed to publish Suo moto without even an application, something which critically highlights the callous attitude of the authorities in the department[ix].

Abey George, state convenor of the NCPRI had highlighted the egoistic approach of the authorities when a question was asked to them. Instead of answering the question and making the information public, they would make it a point to return the application citing flaws in the way the question was asked, once again proving the point that transparency in the government working is still a dream.

A major problem lies in the commissions itself. An accumulation of 10 years of fines collected by the commission till the year 2016-17, has been only Rs 1.29 crore. Add to that the fact that a state like Andhra Pradesh has no information commission since 2014 when Telangana was carved out as a separate state. The Gujarat and Nagaland states have been headless in terms of their information commission for a long period of time and there are huge vacancies in the commissions of Karnataka, Uttar Pradesh, Haryana and Punjab[xi], we see that the situation in India is pretty grim.

In America, seeking government information from various government agencies falls under the ambit of The Freedom of Information Act 2005[xii]. It allows any person, individual or corporate, citizen or not to request and obtain, without any explanation or justification, existing, unpublished records of the agency on any topic whatsoever. It was signed by the then President Lyndon B Johnson on July 4th 1966.

Like the Indian RTI, it isn't an all-inclusive act. It exempts nine specific categories of information which includes National Security, law enforcement, trade secrets among others, which essentially means that information of these specific matters even though pubic, can't be asked for under the Freedom of Information Act.

The Legislation had been amended in the year 1974 after the Watergate scandal to ensure greater agency compliance. Subsequently in the year 1986, it was amended to provide wider exemption protection for law enforcement information and in 1996 to allow the public to have greater access to electronic information.

Another legislation, the Open Government Act of 2007 implemented a few provisions in the aforementioned legislation. It now became the prerogative of the agency to send misrouted requests to the appropriate office within 10 working days. Further the clock could be stopped only once for non-fee related matters whereas it could be stopped as many times as need be for fee related matters[xiii].

Not only is the law pretty stringent in this regard, the process of filing is streamlined as well. Alongside this, provision has been made to make it mandatory to submit an annual report to the Attorney General on or before the first of February every year which should have the following:
As is pretty evident from the nuances of the law, the process of obtaining information in the United States is pretty efficacious to say the least. Stringent measures to ensure that certain government data is not kept out of the reach of the public, ensures that the general public is kept into confidence.

This essentially is the key factor in the working of a well-oiled democracy. As far as India is concerned, certain changes have to be incorporated in the Right to Information Act, and more stringent checks have to be implemented to ensure that the common man is not kept out of the workings of the government. It is their votes which ensures that the government stays in power and hence it is the governments responsibility to ensure that all the information reaches to the public in a hassle-free manner.

Balancing The Right To Info... 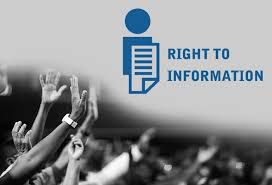 All You Need To Know About ...

The Right to Information

Constitutionality of the RT...

Right to Die with Dignity a...

What Is Right To Information