Theories And Modes Of Acquisition Of Property

By Joshi Kumar | Views 10274
Ever since man started on his road to civilization, wealth has been the primary fuel to boost the road. From the very beginning, man has strived to fulfill the thirst for power. In primitive, ancient, and medieval times, power would mean physical power, i.e., the strength, army, kingdom, and many more.

But the wheels have turned now. In the modern days, there seems to be a paradigm shift in the equations of power. Today, power in all means is money or wealth. Every endeavour that human beings have took up were solely for acquisition of wealth. Well, wealth could be of different types here. These days the term property is used rather in a more generalized form. If a person looks around in the surroundings, everything that is been seen may be categorized as property.

With the growing importance of each thing, wealth might consist of things like money, assets, industries, machinery, infrastructure, intellectual wealth, etc. The most primary one of it is the property. Property is where the real wealth in this developing world is lying at.

But, the reason as to how the concept of so-called property and ownership have emerged is still a vague area filled with many theories.

Definition
The term property is said to have been derived from the Latin word - 'Properietate', which means something that is/can be owned. Asset is nothing but a basis of expectation; the expectation of obtaining certain advantages from something which we are said to own, in consequence of the relation in which we stand towards it. Some of the definitions of property are as follows:

The word 'property' is often used to refer to something that belongs to another. But 'property' does not refer to a thing; it is a description of a legal relationship with a thing. It refers to a degree of power that is recognised in law as power permissibly exercised over the thing. The concept of 'property' may be elusive. Usually it is treated as a 'bundle of rights.[1]
Salmond while defining the term property, observed that the term might be understood in one of the three senses mentioned below:

According to Bentham "property is nothing more than the basis of certain expectation of deriving thereafter certain advantages by a thing the reason of the relation in which we stand towards it. There is no image, no visible lineament which can property the relation that constitutes property. It belongs not to physics, but to metaphysics. It is altogether a conception of Mind. To it, all or any of these physical circumstances failed to assist in conveying the idea of property."[2]

The concepts of property and ownership goes hand-in-hand. There is no ownership without property and there is no property without ownership. Ownership is that feeling of the rightful possession of a property which Is now legally recognised. A pe rson who is said to have had the ownership of a particular property is entitled to enjoy the property in all means possible. The reason/rationale behind the emergence of the concept of property is unknown. But nevertheless, there are many theories regarding the same. 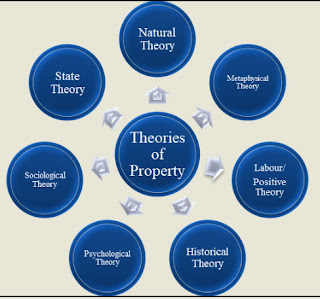 Some of them are as follows:


Now that the concept of property is established and property has come into existence, states have enacted numerous legislations to protect, safeguard and control the property. Property/assets being worth of exchange, people started exchanging one kind of property to the other. And slowly after the development of money, nowadays, properties are being exchanged among different individuals through different means.

Modes of Acquisition of Property

According to Salmond, there are at large five different modes/ways through which property can be acquired. They are as follows:

Case law:
In Ajemer Singh v. Atma Singh,[6] the donor was an old man. He the depended on Charan Singh due to old age. The donor gave the power of attorney onto Charan Singh who took advantage of the situation and got a gift deed executed in favour of his son. Using his position, Charan Singh with undue influence and misrepresentation made the donor sign the gift deed document under the impression that it was a power of attorney. The above transaction was nullified.

Conclusion
The actual reason for the origin of the concept of property is still shrouded in misery. Although many have come up with distinctively differentiative therories, none were free of criticism. Nevertheless, the matter of transaction/transfer of property is gaining importance day-by-day due to growing complexities of life in modern economic world.

Certificate of Orginality
I hereby declare that this article/write-up, entitiled "Theories & Modes of Acquisition of Property" is my orginal work and does not contain anything that is being copied. The matter embodied in this article has not been submitted to any other website or journal. This article is my original work and it has not been presented earlier in any manner. The Legal Service India.com shall have the exclusive copyright in the article after publication in Legal Service India.com e-journal. Date: 09-05-2022 Signature: Joshi Kumar Pinninti\\

The Concept Of Dower Under ...

The Use Of Facial Recogniti...

Freedom Of Press In Today's...

Formation of Coparcenary: U...