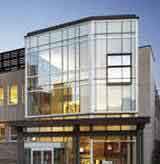 Queen's Law Crest: The words of the motto of the Faculty of Law at Queen's University, Soit droit fait Let right be done, represent both creation of new law and dedication to the traditional values of the legal order.

Embracing our proud tradition of community, collegiality and service to our society, we develop outstanding legal professionals with a global perspective and create new knowledge that advances understanding and development of the law.

Vision
To promote excellence in teaching and research, maintaining and enhancing our rank within the top tier of Canadian law schools, with a financially accessible educational program that is global in scope.

History
The first Faculty of Law at Queen's University was established in 1861; two years later it awarded the first honorary Doctor of Laws degree to Sir John A. Macdonald, who would go on to serve as Canada's first Prime Minister. The first Dean of Law, Alexander Campbell, was also a "Father of Confederation." This early faculty only lasted a few years. Efforts were made to revive the law school in 1880, but after awarding a number of LL.B. degrees the law school closed again, largely because the Law Society of Upper Canada refused to recognize university law degrees.

The modern law school was founded in 1957 with William Lederman, the pre-eminent Canadian constitutional law scholar of his era, as its first dean.

In 2007, the Faculty celebrated the fiftieth anniversary of this founding and the law school's tradition of educating leading members of the Canadian and international legal community. Notable for its commitment to community and academic excellence, Queen's Law continues to be a unique institution in the Canadian legal academic environment. An example of the Faculty's innovative programming is the Global Law Program, the only Canadian legal study abroad program, held at the Queen's University campus at Herstmonceux Castle in Sussex, England.

Queen's Faculty of Law is committed to offering its students international opportunities and a global perspective. The Faculty was the first Canadian law school to appoint an Assistant Dean of International Programs.

Announcements:
* Apply for Upper-Year Awards
Four awards requiring letters of application are available to graduating students, and one award is available to second-year students.