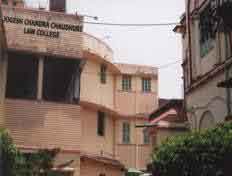 Jogesh Chandra, who was educated in Calcutta and Oxford, was called to the Bar in England. On returning home he joined the Calcutta High Court. His legal acumen and interest in law found expression in the famous Legal Journal "Calcutta Weekly Notes", of which he was the Founder Editor.

In the next generation one finds , as it were, continuation of talent in well known figures as Ranadeb, an eminent lawyer and educationist, and Jayantanath, ex-Commander-in Chief of India's armed forces.

Early in life Jogesh Chandra came in close touch with the great Surendranath Banerjee, ever to be remembered as the Father of Indian Nationalism'. He chose for his life mate, Sarasibala, a daughter of Surendranath, and dedicated himself to work for the country under his inspiring leadership. There was not a session of the Congress in those days where he was not an active participant; on many occasions he acted in such responsible positions as Secretary of the Congress.

The College bears his name and it is hopes that we will live up to the lofty ideals of the public-spirited man, Jogesh Chandra Chaudhuri. The College has completed its Silver Jubilee and we look forward to the Golden with a sense of accomplishment.


Registration Under University Grants Commission
The College Authorities had left no stone unturned to receive recognition from the University Grants Commission, during the last few years . Finally the name of this College was included the list of College prepared under Sec.2(f) and 12(B) of the U.G.C Act of 1956, vide letter No.F8-23/97(CPP-I) dated December, 2000, issued by the U.G.C. Authorities.

As a result the College is eligible to receive Central Assistance in terms of the Rules framed under Section 12(B) of the U.G.C Act 1956 from 10th Plan onwards.

Aims And Objects
The aims and objectives of the institution are not only to promote education by encouraging academic excellence, but also to provide ample opportunities to nurture all round development of pupils and to stimulate and develop creative thoughts in them so that their personalities develop and ultimately they become worthy citizens caring for others, ensuring justice to the tortured and having a sense of duty and responsibility to the society.

It introduces students to a wider world of experience and a larger sphere of activities teaching them to co-operate with their fellowmen and form habits of order and accuracy.