Legal Service India.com
Madhusudan Law College, Cuttack: The history of this intuition can be traced back to 1869 when the diploma course in law and course Pleader ship licence was introduced in the Ravenshaw Collegiate School, Cuttack. Subsequently the course continued in the Ravenshaw College. In the year 1881, Bachelor of Law Course was introduced in the same College under the Calcutta University and continued up to 1908. The law classes were directly under the administrative control of the Principal, Ravenshaw College and the same suffered a set back due to non-availability of qualified teachers and consequently the result in examination was not satisfactory.

It was only when late Utkal Gourab Madhusudan Das, offered his honorary service as a part-time Lecturer that the scenario of legal education remarkably changed. However, non-availability of adequate students resulted in the suspension of the course for about 12 years i.e. from 198 to 1920, The credit for the reopening of the course totally goes to late Ashutosh Mukherjee, the then Vice-Chancellor of Calcutta University who was a student of Utkal Gourab Madhusudan Das.

After the formation of Orissa as a separate Province in 1936,th Govt. of Orissa established Utkal University which started functioning from 27th November, 1943. This University took over the Bachelor of Law classes continuing in the Ravenshaw College as its teaching Department having converted the same into a full-fledged College with its present nomenclature naming it sa Madhusudan law College to perpetuate the memory of late Utkal Gourab Madhusudan Das.

M.S.Law College in course of time became the premier law-teaching institute not only of the State but of the country as well. In the past years it had tremendous contribution in the field of legal academic in the State of Orissa by producing eminent Jurists, Judges, Lawyers and Saw Teachers who have brought name and fame to the institution. M.S.Law College enjoys the status of a constituent college and is directly managed by the University. The College imparts teaching for both under-graduate and Post-Graduate Degrees in Law along with 5 years Intergraded B.A.LL.B.(Hons) Course.

Our Profile:
The organ of legal education in the State of Orissa can be traced Law School. The School started functioning from 10th March 1869 in the Cuttack High School with 15 students on its’ roll. In the year 1881, the Degree course in Bachelor of Law was introduced and continued to run till 1908. However, the legal education received a University. But due to the untiring efforts of Late Utkal Gourav Madusudan Das, a great National Leader, Statesman and a Lawyer of great repute. The classes were again revived at the Ravenshaw College, Cuttack.

In 1936, Orissa became a separate State and the Utkal University was established on 27th Now. 1943 with law as its first teaching department. Madhusudan Law College in course of time became the premier law teaching institute not only of the State but of the country as well. In the past years it had tremendous contribution in the field of legal academic in the State of Orissa by producing eminent jurists, judges, Law – years and Law Teachers who have brought name and fame to the institution. M.S. Law sity. The College imparts teaching for both undergraduate and Post-Graduate Degrees in Law along with 5 years Integrated B.A.LL.B (Hons.) Course. The College is situated close to the Cuttack Railway Station and Ravenshaw College.

The Course have been recognized by the Bar Council of India. The curriculum of the course has been designed in the same line and with the same objective as that of the other leading law institutes of the country. While doing away with part time law study, this course insists upon a full time legal study as in other professional academic streams and aims at an all round improvement of legal education in a suitable manner so as to produce lawyers of the future with adequate knowledge and appropriate training to discharge their professional responsibilities efficiently.

The 5 years integrated Course is being managed by the Utkal University under the advice of a High Power Committee consisting of the Chief Justice of Orissa or his nominee, Hon’ble Vice-Chancellor, Registrar, Controller of Examinations, Member Chairman State Bar Council, Principal of University Law College, Bhubaneswar, Principal of M.S. Law College and coordinators of both the constituent Law College.

Besides the regular curricular activities, research in Law is a distinguished activity carried on in the institution and about 10 research scholars are actively engaged in their research work on various topic of socio-legal importance under the able guidance of the teaching faculty members. 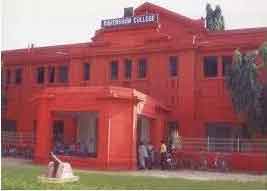