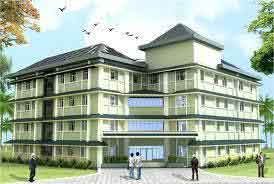 It is going to be a torchbearer in the field of legal education and research in the country. NLUJA is the youngest member in the family of the fourteen National Law Schools and Universities established across the country. Hon’ble, the Chief Justice of Gauhati High Court is the President (Chancellor) of the Law School. NLUJA is located at Guwahati, the capital city of Assam. Though temporarily it is housed in the North Eastern Judicial Officers Training Institute (NEJOTI) Building in Ulubari area, its permanent campus is coming up at Amingaon near the Indian Institute of Technology (IIT) Guwahati, in about a year’s time.

The Committee appointed by the Chief Justices’ Conference on Legal Education and Training (1993) and the All India Law Ministers’ Conference (1995) had resolved to set up in each State of India a Law School modeled on the lines of the National Law School of India University at Bangalore in Karnataka for improving the quality of professional legal education in the country.

Accordingly, the Chief Minister, Assam and the prominent members of his Cabinet discussed with the Prime Minister and the latter assured the State Government that the Central Government will assist in establishing a Law School and Judicial Academy in Assam for imparting legal education for development of teaching and higher learning in law with powers to award degrees, diplomas and other academic distinctions. Further, Periodical Training Programmes will be undertaken as a part of continuing education for advocates, judicial officers, para-legal personnel, government officials etc. including one year compulsory induction training for newly recruited judicial officers. For this purpose, a training institution named Judicial Academy will also function like a separate faculty in the proposed Law School.

The University, styled as the National Law School and Judicial Academy, Assam, was proposed to have full financial and administrative autonomy. It has been envisioned as one of the prominent Law Universities in the country with international character drawing students from all parts of India and abroad through an entrance test conducted on All India basis. It is observed that NLSIU, Bangalore and NALSAR, Hyderabad and other National Law Universities have been able to acquire a state of prominence in a short period mainly because of full autonomy these Universities are provided by the respective State Governments.