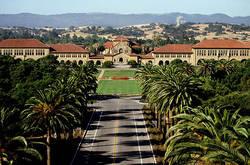 Stanford first offered a curriculum in legal studies in 1893, when the university hired its first two law professors: former President Benjamin Harrison giving lectures on Constitutional and International Law ,and Nathan Abbott. Abbott was given control over the program, and assembled a small faculty over the next few years. The law department was almost exclusively composed of undergraduates at this time, and included a large number of students who might not have been welcome at more traditional law schools at the time, including women and Hispanic, Chinese and Japanese students.

In 1900, the department moved from its original location in Encina Hall to the northeast side of the Inner Quadrangle. The new facilities were much larger and included Stanford’s first law library. Beginning to focus more on professional training, the school implemented its first three year curriculum, and became one of 27 charter members of the Association of American Law Schools. In 1901 the school awarded its first professional degree.

Starting in 1908, the law department began its transition into an exclusively professional school when Stanford's Board of Trustees passed a resolution in 1908 to officially change its name to law school. Eight years later Frederic Campbell Woodward would be appointed the first dean of the school, and in 1923 the school was accredited by the American Bar Association, the year the ABA began certifying law schools. Stanford's law program officially transitioned into a modern professional school in 1924 when it began requiring a bachelor's degree for admission.

The 1940s and 1950s brought a great deal of change for the law school. Even though World War II caused the school’s enrollment to drop to less than 30 students, the school made quick efforts at expansion once the war ended in 1945. Moving to a new location in the Outer Quadrangle and the opening of the law school dormitory Crothers Hall allowed the school to grow, while the publication of the Stanford Law Review started building the school a national reputation. The decision that Stanford should remain a small law school with a very limited enrollment was made during this period.

In the 1960s and 1970s, the law school aimed to become more diverse. A great deal of new and progressive student organizations established themselves, several of which focused on legal issues which largely affected Chicanos and women. The first female and black professors were hired at the school during this period, and the school sought to academically diversify its student body by collaborating with the Stanford Business School to create a joint-degree program. For the third time in its history, the law school relocated in the 1970s to its current location in the Crown Quadrangle.

Earning national recognition in the 1980s and 1990s, the law school made efforts to make its curriculum more progressive. Classes were offered focusing on law relating to technology, the environment, and intellectual property, and international law, allowing students to specialize in emerging legal fields. Additionally, the school’s clinical program was established starting with the public interest East Palo Alto Community Law Project. By the dawn of the 21st century, the law school had created many new opportunities for its students to specialize and get involved in community projects. Over the past few years, a new focus on interdisciplinary education has emerged.